White River Sedge Meadow encompasses the largest southern sedge meadow in Wisconsin.  Located just one mile south-southeast of White River Prairie/Tamaracks and also a part of the larger White River Marsh State Wildlife Area, this natural area can be accesses by numerous parking areas scattered around its perimeter.  The most direct access is from parking areas at the ends of Dead End Road (yes, this road has 2 dead-ends) off of CTH D on the west side of the site or from a parking area reachable via an access lane to the north of White River Road east of CTH D which leads into the southern portion of the site.

Thinking back to 2012, I am not certain which parking area I headed to, but I believe it was the eastern terminus of Dead End Road.  More recently, I returned last month and spent much of the time exploring from the northern terminus of Dead End Road as well as several points along the two arms of the road.  There are no trails here, aside from rudimentary routes or the occasional DNR access lane.  I found the best exploration to be simply heading into the meadow from the gravel road at any one of a number of points.  Some areas are denser with cattails than others, so it was simply a matter of noting the “sedgier” areas from the road and stopping the car there.  Overall, the site was similar to others seen on this day (Comstock Bog-Meadow, Germania Wet Prairie, White River Prairie/Tamaracks), but had perhaps the densest populations of flowering species.  Spotted Joe-pye weed, marsh skullcap, downy willow herb, shrubby cinquefoil, white meadowsweet, turtlehead, swamp lousewort, marsh blazing-star, and several species of asters and goldenrods were all observed on this day.  Butterflies, including black swallowtails and meadow fritillaries, were most common in the parking area as they procured minerals from the seemingly inhospitable terrain.  I would recommend a visit to this site and perhaps several, as it is quite extensive in size (3102 acres, in the top 20 for total SNA size).  White River Sedge Meadow is on my list to revisit, both in another season (late spring/early summer) and again in late summer to explore additional portions of the site. 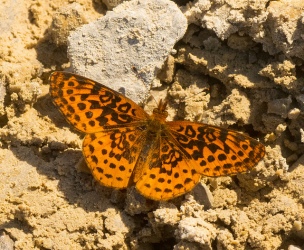 More of my photos (and full-res) from White River Sedge Meadow can be viewed here.