Berlin Fen’s primary features are two fen mounds composed of calcareous peat.  This natural area is easily reached with a parking area on the east side of Willard Road, just south of the Mascoutin Valley State Trail. Walk north along the road to the southwestern corner of the site.

Berlin Fen is certainly one of the easier fens to explore.  One can literally walk on the road to reach it.  Often times, fens are ringed by wetter areas or thick, shrubby zones that may include poison sumac.  My first trip here was on my own and I returned as part of a field trip just about 2 years later.  I always enjoy going to sites as part of field trips because they are typically led by experts who know the site, such as DNR ecologists.  A neat and simple experiment was conducted in which cores were taken of the soil/marl from the fen mound and some distance away from it.  Both samples were pH’ed and the results compared.   As expected, the calcareous fen mound was more alkaline and thus more basic (higher pH). On my visits here, shrubby cinquefoil, spotted joe-pye weed, and pitcher plant were the most abundant species.  Of note, were the presences of huron green orchid (not rare, but always nice to see) and sticky false asphodel, a threatened species in the state of Wisconsin with a coefficient of conservation of 10 (the highest possible).  Species such as this prefer the calcareous marl that comprises these fen mounds, which contain unique groundwater and pH characteristics.  I thoroughly enjoyed visiting this site and look forward to the chance to return at different times of the year to note how the fen changes with the seasons. 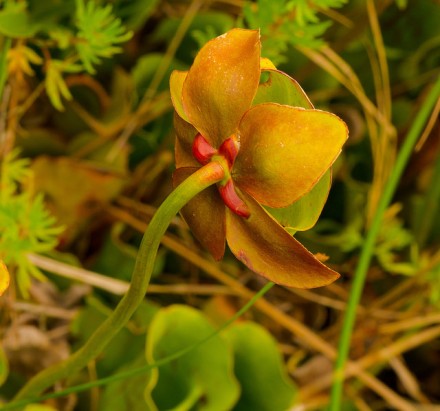 More of my photos (and full-res) from Berlin Fen can be viewed here.