Wyalusing Walnut Forest encompasses several forest types from wet to dry on and below a bluff overlooking the confluence of the Mississippi and Wisconsin Rivers.  It is found within Wyalusing State Park, easily in my top 2 Wisconsin State Parks.  Great views, wonderful natural areas, and outstanding birding can all be found here.  Though a popular park, the people are a bit more dispersed than at Devil’s Lake or Peninsula. To reach the natural area, take the main state park road north and park near the nature center.  The Old Bluff and Sentinel Ridge trails pass through the edge of the natural area, on top of the bluff.  The state park map shows an Old Immigrant trail that looks like it passes through the lower elevations, but I have not found this trail at the park, it is not listed on the park’s trail page, so I believe it may have been closed  due to the troubling terrain.

We bookended our first day in southwestern Wisconsin with a visit to Wyalusing Walnut Forest after starting at Wyalusing Hardwood Forest. My first excursion here was in the late evening hours and followed the Old Bluff trail from the nature center. Limited exploration is available from here as the there is a fence along the trail and the slope is rather steep in this area.  There are some neat nooks and crannies in the bluff wall here and several geologic features including Signal Point, Lookout Point, Treasure Cave, and Point Lookout that provide nice views.  Eventually, the trail ends because a fence has been erected, though one can clearly see the trail continuing to head southwest.  I returned several years later and explored a bit more of the upland portion of the natural area along its southern edge.  Neither of these areas are the namesake walnut-dominated portions, so that is a big reason I would like to return.  The bulk of this site lies below the bluff and is worthy of further exploration. 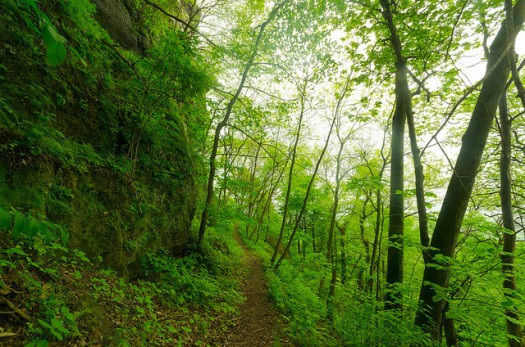 Trail on the Bluff 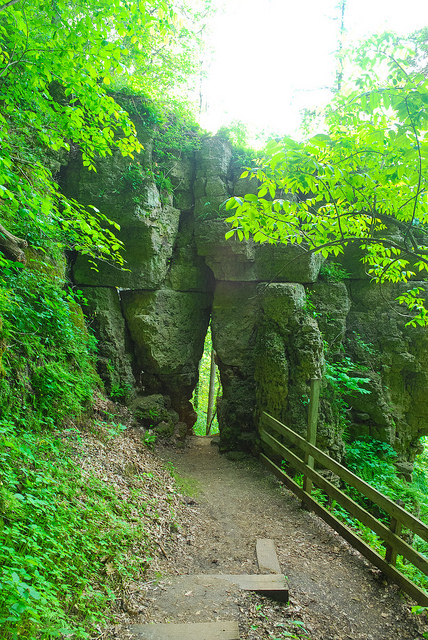 Trail through the Bluff

More of my photos (and full-res) from Wyalusing Walnut Forest can be viewed here.