Snow Bottom certainly packs a punch in terms of natural community diversity in a small area.  Though there are 3 parcels to this site, only 2 are accessible as one is landlocked.  The western parcel is accessed off of Cedar Rock Road, while the eastern parcel can be reached from a parking area on Bowers Road.

The western parcel contains a forested slope, a portion of Castle Rock Creek, and some agricultural fields, that presumably will be restored to a more natural ecosystem in the future.  During my visit to this parcel, I spent most of my time on the hunt for ephemeral wildflowers among the trees on the slope.  Trillium, violets, and Jacob’s Ladder were found in this area.  I then moved on to the eastern parcel, where a faint path leads along the Blue River.  A bit of the way in, rock outcroppings begin to appear on the landscape.  I have always found this seemingly inhospitable microenvironments fascinating for the diversity of species that call them home.  Here, trees, lichens, and wild columbine were abundant.  Both of the times that I have visited this parcel were at the end of long, multi-day trips and so I did not have the time to explore as thoroughly as I would have liked.  In particular, the eastern parcel seems to be the most ecologically exciting parcel and I look forward to the opportunity to delve a lot deeper here. 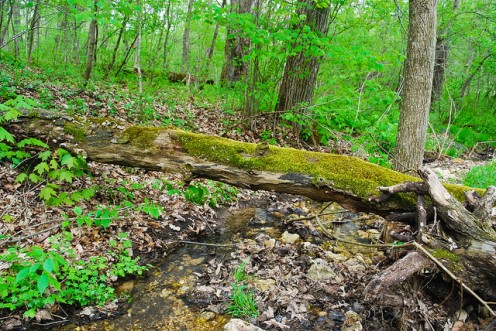 More of my photos (and full-res) from Snow Bottom can be viewed here.